The past year has gone well for SCA, despite the continuation of the Corona Virus pandemic and the new variants of first Delta and then Omicron. The pandemic issues have kept the majority of meetings on Zoom. However, Zoom has also created more of an influx of members from around the world, the opportunity for more meetings to develop, and some cross-pollination of meetings. For instance, many SCA members from SCA NY were able to attend the SCA LA Fellowship Weekend. So, although there will undoubtedly be a solid return to in-person meetings whenever the world gets to post-pandemic reality, the presence of Zoom meetings and in-person hybrid meetings look as though they will continue to be a vital part of SCA.

In other good news, donations to SCA are relatively steady. Although there has been a slight downturn in 7th tradition donations from 2020, the 2021 donations exceeded our budget’s expectations. A smaller revenue stream also seems to be developing from our new Recovery Book publication. It seems as though the sales of retail books more than offset the discounts given to SCA groups. The Fiduciary chair will discuss more, but SCA isn’t about to go broke. Judging by the numbers, we will likely be able to fund more new literature publications and other possible projects.

I would now like to take a moment to remind the ISO body of where SCA was at last year’s conference. Our excellent former chair, Gordon B., had pointed out the top six areas of concern that the fellowship-wide inventory pinpointed. They were:

“(1) Not enough focus on the Steps; (2) Low or shrinking attendance; (3) Fellowship not welcoming enough; (4) Not enough outreach or visibility to the public; (5) Not enough safety in the rooms; and (6) Need for better, additional, and updated literature.”

Gordon noted the first steps that he took to address these issues. The largest of these was the development of our Recovery Book. It received final approval at last year’s conference, and Fiduciary had it subsequently published.

In looking at points 1, 3, 4, and 6, our “Big Book” certainly took a big swing at addressing them. The commentaries on The Steps and Traditions and the variety of stories from various backgrounds, sexualities, and genders make SCA’s book the most up-to-date and inclusive 12- Step focused book on recovery from sexual addiction that is out there. Furthermore, having the book available in print and on various digital platforms has made the SCA take on sexual recovery more visible to the general public. Adding to that visibility is the work done by our Inreach and Outreach Committees and our Outside Director, Dr. Alexandra Katehakis. These actions around the new Big Book have made SCA more known to the addicts who still suffer and the professionals who work to treat them.

Another step Gordon initiated was the approval of our inclusivity and diversity policy, which then went out to the various Intergroups and individual meetings. That policy now has an official link on ISO’s public-facing website. Also changed is our welcoming statement. As voted on in that conference, it now says “people” instead of the gendering phrase, “men and women.”

My First Year as ISO Chair

For me, this year has been somewhat of a whirlwind. I could not have gotten through without the support of all on the executive committee, especially that of Fiduciary Committee Chair David N. and former chair Gordon B. I have had opportunities to speak with and exchange emails with some of you, and I look forward to getting to know more of the “ISO Crew” in the upcoming year.

There are several issues about literature on the agenda; two items are about brand-new literature, while the rest are about our current literature.

The first four issues are things I see as being important in the ongoing need to address the concerns found in the 2019 survey. This need is because when considering the top six issues found in the survey, most of them can be addressed, directly or indirectly, by work in the area of literature. What ISO has done thus far is an excellent start, but there is still more to be done.

Whether it be our website, a book, or a pamphlet, literature can be one of the first introductions a person has to SCA. Therefore, when considering how we approach literature and literature development, it is essential to remember how and why the founders started SCA. In part, we are a program that came about because the other S-fellowships forming around the same time were not welcoming and inclusive toward those in the queer committee. Because of this history, we are the fellowship that should be making the largest attempts to be open, welcoming, and inclusive to groups of people that continue to be marginalized and excluded from “mainstream” recovery today.

Here are the ways the four new projects address those survey concerns while staying true to the founding principles of SCA.

One of the ironic things about the COVID pandemic and the shutting down of in-person has been the opportunity for growth and expansion via Zoom. Gordon wrote extensively about the rise of newcomers from all over the world. These newcomers could find SCA because of our website and the Zoom meetings. As a member of other fellowships, I can note that this isn’t just happening in SCA. Most 12-Step fellowships have reported an increase in newcomers and inquiries.

With this in mind, we must begin to think of Zoom meetings not as something we make do with until the pandemic ends. They are not just “until we get back to in-person meetings.” Instead, Zoom meetings need to become a part of the regular structure of how our program works. We need to consider them as much of a meeting as those conducted in person. Perhaps, over time, we will have more hybrid meetings or even mirrored meetings where online and in-person versions are co-occurring. What’s important is that we consider them to be a permanent part of recovery.

In terms of future literature, one thing worth noting is that while ISO certainly doesn’t “commission” new literature, we can be the catalyst for having various Intergroups start thinking about developing some. There was much cross-pollination between ISO and Intergroups that led to the development of our Big Book and the possible new literature we’ll be looking at today. This dynamic is not breaking the “bottom-up” structure: it is the ISO’s reaction to the survey that says the fellowship would like new literature.

How does this work? Here’s an example. I told a fellow that it would be nice if we had a pamphlet about being trans, non-binary, or non-gender-conforming in SCA recovery. That fellow got excited about the idea and planned to start working on it to take to their intergroup. If that happens, it could eventually make its way to the ISO Literature development committee.

Having more new literature that fits with the current influx of newcomers is vital. For instance, the PoC meeting out of NYC uses SLAA’s PoC pamphlet as reading material. It would be better if we had our own pamphlet. Mentioning this at meetings that it would be great if SCA had its own PoC pamphlet might inspire someone to write one. Another possible pamphlet idea is SCA and chronic illness. From HIV to age-related illnesses to long-term Covid, a pamphlet addressing chronic illnesses while in recovery is one that would be great to have.

Making these kinds of announcements at meetings or fellowship invites new and different people to a new level of service. It is also letting them know that others see them in our program. This outreach is very much in line with our commitment to the newcomer – all of them. I will also reiterate that it falls in line with SCA’s history. We are the program founded in part because others did not give the lives of non-straight people a thought. We don’t want to be a program that does that to other groups of people who may be very different from our own backgrounds and sexualities. All that matters is making them feel welcome as they join us on the road of recovery in SCA.

Summary Report on the ISO 2022 Conference

The International Service Organization of Sexual Compulsives Anonymous held its annual conference this past weekend: April 29 – May 1, 2022.

Listed below are some of the conference’s highlights, which took place on Zoom.

Delegates representing 82 meetings attended the conference. Several members of SCA Japan (9 meetings) joined us Friday night and made a full report of SCA Japan’s activities. We also heard from most domestic US/Canada meetings and some scattered international meetings.

Decisions made and Actions taken

In keeping with our rotation of service policy, half of the ISO Executive Committee positions were up for election.

from Dr. Alexandra Katehakis – Outside Director for SCA :

“We’re living in a disruptive time; pandemics, war, and climate change disasters are on the rise. I don’t
think we’re ever “going back” to what was. As such, I believe we will continue to see an increase in
addiction as people grasp to regulate themselves and find meaning in a topsy-turvy world. Sadly, the
current sociopolitical climate engenders isolation, violence, and deprivation of those in need making
SCA and its services more critical. SCA will remain a beacon of light through inclusivity, a place for
people to find a “home” where they won’t be judged, and caring fellows to soothe and support them.
May you all flourish and be well.” 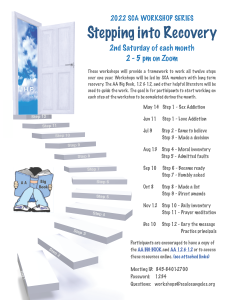 “Breaking Out of Isolation”

Held on Zoom & Free of Charge

E-Book Version of Avoiding Common Pitfalls is now available for sale on any of our three (3) E-Book platforms. This version contains all of the revisions and additions included in the corresponding chapter in the new Recovery Book. The price for the E-Book is $0.99.

Other E-Book versions of chapters containing new material will be available in the coming months.

Please keep our International Meeting List (located at sca-recovery.org) apprised of any changes that may take place.

We have just learned that there has been a SCA In-Person meeting ongoing, every Sunday at 7:30pm in San Antonio, Texas for the last 8 months.  It is growing and is now listed on our meeting list.

By having your meeting listed you get the support of the whole fellowship.  Everything from new literature announcements to ongoing service opportunities.

This book contains over 200 pages of more than four decades of experience, strength, and hope in recovery from sexual compulsion. It has been written, edited, and published entirely by members of Sexual Compulsives Anonymous (SCA). This 3rd edition is an expanded and updated version of SCA’s previous recovery book. It includes commentaries on the Twelve Steps and Twelve Traditions as adapted from the original principles of Alcoholics Anonymous, as written by members of SCA, and personal stories of recovery.

To order please go to our online Literature Store at sca-recovery.org

How to Handle a Zoom Bombing:

IF A MEETING CHOOSES NOT TO HAVE A WAITING ROOM:

a. Lock the meeting so no one new can enter.

b. Enable the waiting room.

f. Disable the ability for people to rename themselves.

g. Disable the ability for people to unmute themselves.

h. Disable the ability for people to turn on their video

Once the room seems clear of uninvited participants, you need to click on “Security” again and:

a. Unlock the Room (click “Lock Room” to uncheck it).

c. LEAVE THE WAITING ROOM TURNED ON FOR THIS MEETING.

d. Turn on Chat (click “Chat” and a checkmark will appear).

g. Turn on Start Video (click “Start Video” and a checkmark will appear).